I have a friend who is an award-winning BBQ pit master. Follow your nose through my sleepy little hometown on any given Saturday, and that unmistakable aroma of meat on the grill will lead you straight to him. You can find him there in the grocery store parking lot from 9:00 a.m. until the food runs out (usually between 1:00 and 2:00 in the afternoon). For anyone unfamiliar with his product, it may seem kind of silly for a steady line of people to stand single-file in the blistering mid-day sun, or ankle-deep in a Noahic downpour, or huddled against each other in a blinding side-ways snowstorm. But those who have tasted his fall-off-the-bone ribs, buttery smoked pork chops, melt-in-your-mouth double-smoked bacon, and of course, his signature pulled pig piled high on a bun with his “spirited” sauce on the side…well, they get it. One bite is all it takes to be hopelessly hooked on this succulent smokey crack.

Some people like their BBQ smothered with sauce, and that is completely their prerogative. I like mine with sauce on the side. That’s not to say the sauce is bad. That sauce is seriously good stuff. I try to resist drinking it straight from that little Styrofoam cup. Keeping the sauce on the side, however, heightens my meal to a sensual experience. I’m better able to fully experience the layering of flavors, from sauce, to smoke, to meat. And tucked somewhere in between is my friend’s secret blend of spices and seasonings.

Every BBQ pit master has his or her special blend of spices, the formulas of which often remain highly guarded secrets. Such spice blends are used to achieve a unique and consistent flavor profile that keeps BBQ fans line up for more.

Spice blends have been used for hundreds of years long before BBQ came ashore on this continent, so let’s set BBQ aside just for now. “Powder Blanch,” “Powder deuce” (sweet powder) and “Powder fort” (strong powder) were used in medieval English and French Kitchens to season a variety of soups, stews, and roasted dishes. By the end of the 17th century, kitchen blends began to take a more standardized form with nutmeg, cinnamon, ginger, and black pepper taking on predominate roles. Some were loaded with salt, some weren’t. I suspect their popularity was largely borne out of convenience. Spices were primarily sold in whole form and had to be ground or grated when needed. A pre-ground preparation of the more commonly used (and desired) spices made the seasoning of foods much easier.

By the end of the 18th century, these spice blends had acquired the common name “kitchen pepper.” For the most part, the various recipes included in the period cookbooks are very similar to one another. There were also a number of outright plagiarisms that food historians expect of the period. But as the popularity of kitchen spread into the 19th century, a broader variety of recipes began to appear on the published pages. Here are some of the recipes I found in my research.

From “A New System of Domestic Cookery,” by Maria Rundell (1808) 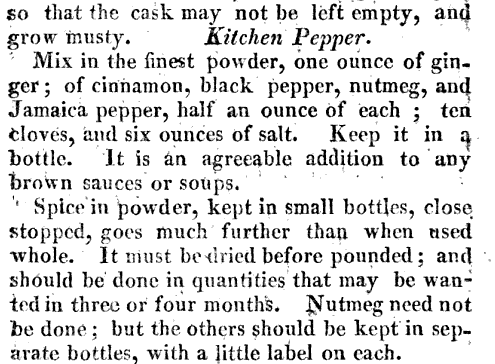 From “The English Housekeeper,” by Anne Cobbett (1835)