Of Buttermilk and Bread 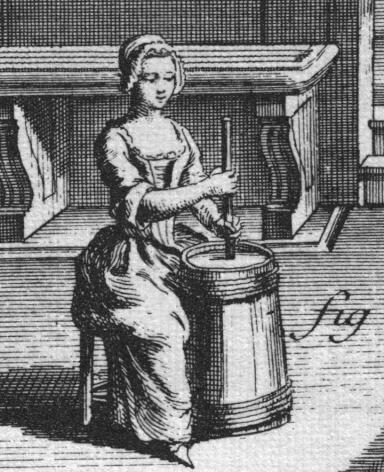 Buttermilk in the 18th century was different from what is typically available in grocery stores today. It was the dairy by-product left over from the churning of butter. The terms “buttermilk” and  “whey” were interchangeably in many texts and period dictionaries.

Today’s buttermilk is typically milk inoculated with a lactic-acid bacteria. It has a thick viscosity and a tart flavor. The same bacteria exists naturally in traditional buttermilk, giving it a tart flavor as well. Traditional buttermilk, however, is usually much thinner than modern cultured buttermilks. The lactic acid in both traditional and cultured buttermilk makes both ideal reacting agents for such chemical leavens as Baking Soda and Baking Powder. That is why many pancake, biscuit,  and soda bread recipes utilise buttermilk. But chemical leavening wasn’t in popular use until the very late 18th century, and more like the early 19th century, so buttermilk would not have been used in baking for that purpose in the 1700s.

Very few references exist in the original cookbooks regarding the use of buttermilk. The “Dictionaire Oeconomique” by Noel Chomel (1725, London) suggests that buttermilk should not be discarded, but rather, it should be given to the poor.

William Ellis mentions in “The Country Housewife Family Companion” (1750, London) that some bakers would use buttermilk in place of water or milk in the baking of bread dough. This is of particular interest, as one strain of lactic-acid bacteria (Lactobacillus) that is sometimes present in buttermilk is the same genus of bacteria that is cultivated to produce sourdough bread.

This entry was posted in Bread and tagged buttermilk, sourdough, whey. Bookmark the permalink.

4 Responses to Of Buttermilk and Bread