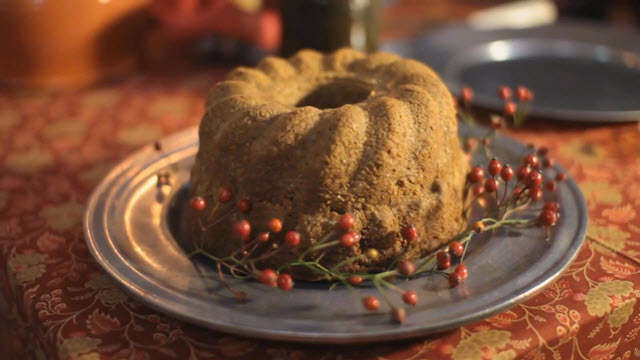 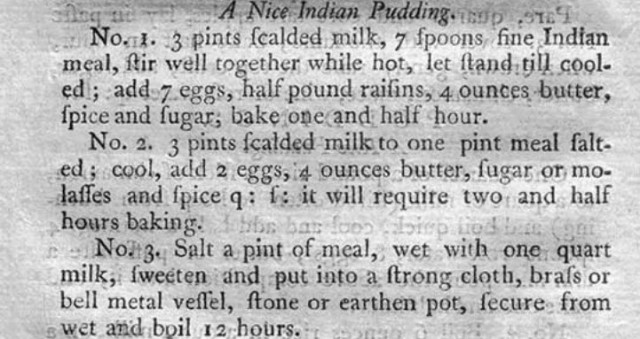 Bring milk to a gentle simmer on fairly low heat constantly stirring so milk does not burn on the bottom.

Once simmering, add cornmeal and continue stirring and cooking until it thickens. Remove from heat and allow to cool just enough that it does not cook the egg when added. When cooled enough, add egg, butter, spices, and molasses and stir until well mixed and the butter is melted. 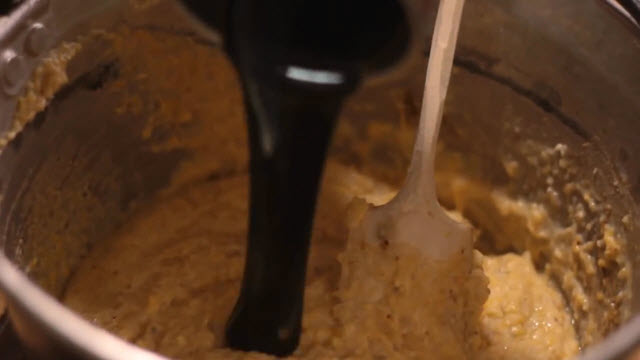 Pour into well buttered mold and bake at 325 degrees for about an hour and a half.

We’re right in the middle of a series. We’re making an American holiday meal based off of a recipe from Amelia Simmons’ 1796 cookbook, American Cookery. Today we’re making her tasty Indian pudding.

We’re starting off with 3 cups of milk and we’re going to scald this milk and bring it to a simmer and then I’m going to add 1 cup of cornmeal. While this is cooking, I’m going to keep stirring it because I don’t want it to burn on the bottom. We’ll know when we’re starting to get there when this really starts to thicken up. What we’re doing is here is making basically a hasty pudding with our cornmeal, so don’t get in a hurry with this. Keep this on a fairly low heat. Make sure to keep stirring it so that it doesn’t lump up. This is really nice and thick, it’s time to take it off the fire.

Okay, this is already starting to thicken. We want to add our final ingredients. I’ve got 1 egg that’s well beaten. This mixture should be warm, but cool enough so that when you add your eggs, they don’t get cooked. We also have a couple of ounces of butter.

Our final ingredient is a ¼ of a cup of molasses.

We want to stir it until it’s all incorporated and all the butter is melted, and then we can pour this into a mold. I’m going to use one of our Turks hat molds, and make sure it’s well buttered so that you can get it out easily.

We need to bake this, probably an hour and a half or so at 325 degrees. Let’s get this in the oven.

That turned out beautiful! Now right now I would sample this, but we’re going to have to wait to put this whole feast together. I want to thank you for joining us today as we savor the flavors and the aromas of the 18th century.