Our hash is a fairly simple dish.

Take some finely diced salt pork browned up with some onion and a couple of parboiled or already boiled potatoes. 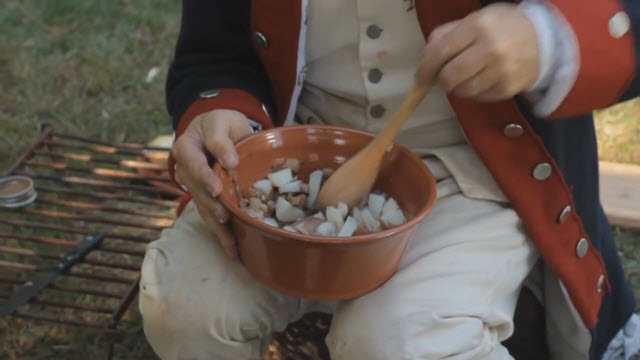 Dice and mash the potatoes. Mix the pork and potatoes together.

Add a little bit of milk to make the mixture moist. If you happen to have some allspice, it makes a wonderful addition to the hash.

Form into patties and fry it in a frying pan until golden brown.

So today we’re going to take a common soldiers ration and we’re going to turn it into three different meals, a soup, a stew and a hash. The foundation of our stew and our hash, we’re going to use salt pork, and the foundation for the stew, we’re going to use fresh beef. So the salt pork we’re using today is a salt pork that we prepared in an 18th century manner. When it’s time to use the salt pork, you have to soak it. You have to take several hours, soak it in water, change the water out, soak it again, until it’s ready to use. If you don’t soak it several times and get all the salt out, it’s inedible. So, the big difference between a soup and a stew is how much water we use when we prepare it, and the first thing we have to do is to get this water going, get it boiling. I’ve got 6 pints of water starting to boil here for the soup, and I’ve got 3 pints for the stew. Let’s start out with our soup.

While our 6 pints of water is getting ready to boil here, I’m going to brown our salt pork in a little bit of fat.

I’m going to let this set and sear a little bit. Browning this meat first will release a lot of the flavor. So we’re doing this in small batches. If we do too much at once, we can’t get it to caramelize properly. It releases too many juices.

Once your salt pork is browned, it’s time to dump it in your boiling water. If any scum develops on the surface, scrape that off. You’re going to let this boil about 15 minutes.

Now that our soup has boiled about 15 minutes with the meat in it, it’s time to add some other things. I’ve got some carrots here and some parsnips. We’re going to add those. So there’s the carrots, part of our parsnips. From our pocket spice kit, we need to use a little bit of salt and pepper.

It’s also now a good time to add a bay leaf if you’ve got it and we’ve got a little bit of cider vinegar, just a splash or two of cider vinegar will really set this off.

Now that we’ve added these things to our soup, we’re going to moderate the fire a little bit and let it simmer for about an hour.

Now that our soup has simmered about an hour, it’s time to throw in some cabbage if we’ve got it and I’ve also got a little bit of rosemary and thyme. I’ve got a little bundle here that I’m going to throw in. You don’t want to put this stuff in too soon or it’ll destroy the flavors.

Many period recipes for soup like this will call for bread to be cubed up and tossed in at the end, kind of like dumplings.

We’re going to let this simmer for another 15 minutes

For this recipe I’ve got about a half a pound of dried peas here. We soak these overnight, so they’re going to be ready to cook.

So I’m starting out with about a half a pound of beef here. This should go really nicely with our peas. Coating this meat with flour and then browning it will help thicken up the stew.

So now that our stew has boiled for about 15 minutes, we’re going to add some potato, some onion and some parsnips, along with some salt and pepper. We’re going to let that simmer for about an hour.

You’ll know this stew is ready when the peas break down and the stew thickens up and that really is a matter of how long you’ve soaked your peas. If you haven’t soaked them at all, this might take 2 or 3 hours, but if you soaked them it won’t take as long. While our soups and stews are simmering here, let’s start the hash.

Our hash is a fairly simple dish. I’ve got some finely diced salt pork here. I’ve already browned this up with some onion and I’m going to take a couple of parboiled or already boiled potatoes. I’m going to dice these up and mash them. Put them in with that.

We also need to add a little bit of milk to give it some liquid to work with. If you happen to have some allspice, it makes a wonderful addition to the hash. I’m going to form this up into patties and fry it in our frying pan.

Well, there we have all three dishes finished. We’ve got a salt pork soup and the salt pork really has a wonderful flavor. The saltiness balanced out with the other flavors actually extremely good. Here’s our salt pork hash. It may not look great but let me tell you, it is my favorite on the table here, the salt pork, very tender, just the right amount of saltiness, along with the potatoes and the onions, definitely a favorite. So the last dish here was the stew, this is the beef and peas stew and it thickened up rather nicely. The peas add their own kind of sweetness to it. The beef is excellent in here. Any one of these things you will definitely enjoy.