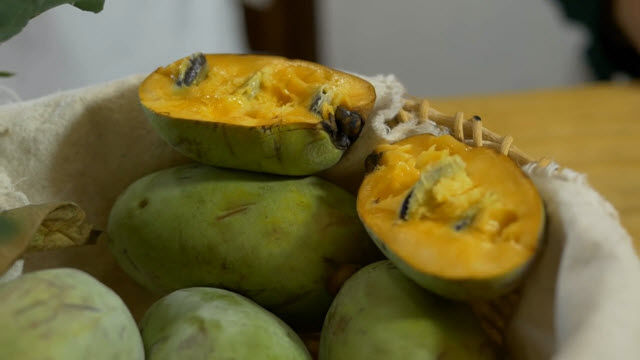 Paw paws are a small yellow fruit native to the Eastern United States, but has a very short harvest season of only a week. Because of this short harvest season, it is hard to find recipes for this delicious fruit so we have adapted a pumpkin pie recipe from Amelia Simons’ “American Cookery” cookbook. 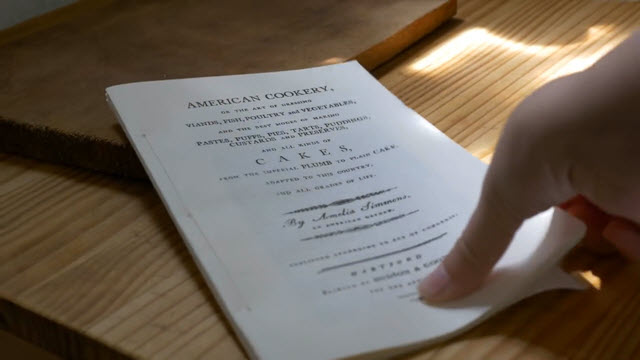 Make sure to remove all seeds from the paw paw flesh and mash it up. Whisk in milk and egg getting the mixture as smooth as possible. Mix in your molasses and spices. This mixture will be a little thin but will thicken up as it cooks.

Pour the mixture into your pie crust and bake at 350 degrees for 1 hour 20 minutes. Allow to cool completely, probably even overnight before slicing.

[Jon] Ah, let’s take a look! Wow, I’ll bet this is the leaf from the tree they came from?

[Ivy] What are they?

[Jon] These are paw paws. I’ve got an idea for these. Let’s take them to the kitchen.

[Jon] So paw paws are a strange exotic kind of fruit.

[Ivy] They look like a cross between a potato and an avocado.

[Jon] I mean, obviously, these really green ones, these aren’t done, but when they start to turn yellow, maybe with little brown spots like this, like a banana starts to get overripe, that’s when you know they’re getting ripe.

[Ivy] What do they look like on the inside?

[Jon] Well, on the inside, well, let’s cut this one open and we’ll find out. There we are, so look at that.

[Jon] Yeah, they’re very yellow on the inside and look at those seeds. Here you can pick one out.

[Jon] Definitely has an interesting fruity smell to it, like maybe some mango, that’s kind of what it looks like here, or apple flavor.

[Jon] Is it like a sweet fruity flavor? Let’s see. Mmm, look at the texture though. It’s very soft and almost like a custard on the inside. A very soft and gentle flavor, but nice and sweet. You know they’re not very rare. They actually grow in most of the Eastern United States and all the way up into Eastern lower Canada, but the harvest season on these is very short. They’re really only ripe and ready to go for a couple of weeks, maybe only one week in the year and the forest animals can smell them and they’ll come and get them.

[Ivy] I can see why, they’re delicious.

[Jon] They do smell really good and you can tell how they could probably smell them from miles away. They also don’t travel well, so we’ll probably never find them in something like a grocery store. You might find them in a local farmer’s market or if you don’t find them there, you going to have to find them yourself in the woods.

[Ivy] Did people eat them in the 18th century?

[Jon] Actually they were eaten by the Native Americans and the settlers alike in the 18th century and you do find references to them, but you don’t really find them in any cookbooks, probably because they weren’t available all the time, so you never find a recipe until much later on in the 19th century. There’s also references to Louis and Clark feeding on these almost entirely at the very end of their journey’s in 1806. Louis and Clark were coming back and all their supplies were gone and so they had nothing but paw paws to survive on for a short period of time. So, let’s pretend we’re settlers and you’ve brought a whole bunch of paw paws to me, in fact you have brought a whole bunch of paw paws to me today and we can’t eat them all right away so what are we going to do with them?

[Ivy] I would find a recipe that I really liked that would preserve them.

[Jon] Right, but we don’t have any recipes that they had in the 18th century, so maybe we would…

[Ivy] I would adapt the recipe for something similar.

[Jon] And that’s exactly what they would have done in the 18th century. I’ve got a good idea for something that would probably cook up nicely. Hand me that little cookbook over there. So, this is Amelia Simons’ “American Cookery” cookbook. She did this one in 1796. It’s got a perfect recipe that I think will work with this. It’s called a pumpkin pudding. It’s really much what we would call a pumpkin pie, so we’ll adapt that recipe for these paw paws. Let’s get started.

[Jon] So, to get started, I’ve got a pie plate here with our pie crust in it and I’m going to set this aside and we’ll work on the filling. And the filling I’ve got here is about 1 cup of the paw paw flesh. We’ve got it taken out. I’m not sure if I got all the seeds, so I want you to mash that up and make sure we got all the seeds out.

[Jon] Good, that looks like we don’t have any seeds in there so go ahead and lift that out. I’m going to add in about 1 cup of milk. We’ll add that to it, and I’ve got 1 egg we’ll add to this. Pretty simple recipe. There’s our egg. And now we can whisk it. Now the trick with this is to get it ask smooth as we can. We don’t want it to be too lumpy. And this fruit can be a little stringy, you know, it changes its consistency, so we’re really going to have to get it mixed up well.

[Jon] Good, you’ve got that nice and smooth. We’ll add 2-3 tablespoons of this molasses and now we can add some spices. I’ve got a teaspoon of allspice and a teaspoon of ground ginger. We’ll add those in and keep mixing. Okay, it looks like you’ve got the consistency pretty well. There’s still a little lumpy but I don’t think it’s going to make any difference in this particular recipe.

[Jon] Well, you know, it is very, very thin, but I’ve made this recipe before and I thought at first, the first time I made it, that it was not going to work, but I baked it anyway, and it turned out perfect, so I’m going to trust that this will work out just fine, so let’s pour this into our pie plate, here we go.

[Jon] Okay, our pie plate is filled nicely. This looks good. It’s ready to go in the oven, so we’ll bake this at 350 degrees for maybe an hour and 20 minutes. I’ll put this in the oven.

[Jon] Before we slice this pie, we need to make sure that it’s cooled completely, probably even overnight.

[Ivy] I’m surprised how dark it is.

[Jon] You know, it is nice and dark. It looks very rich. Part of the color is going to be from the molasses and part of it’s just what’s happening with the paw paw. Let’s find out how it tastes.

[Jon] Well, boy, I’m really trying to find the flavor for this. It’s a wonderful flavor. It’s got a little bit of pumpkin pie in it but it’s much fruitier. It has an amazing little flavor to it. Boy, this is really good.

[Ivy] I can taste the allspice in it.

[Jon] Yeah, it’s wonderfully flavored. Thanks for bringing those paw paws in. They turned out to be tremendous in this dish and I want to thank you for coming along as we experiment. You never know what these things are going to turn out like, so as we savor the flavors and the aromas of the 18th century. And a special thanks to Jim Hoffman for his assistance in this episode.

If you’re new to our channel, I want to welcome you. You can subscribe by clicking the button right up here. Also, check out our related videos. Thanks so much for watching.