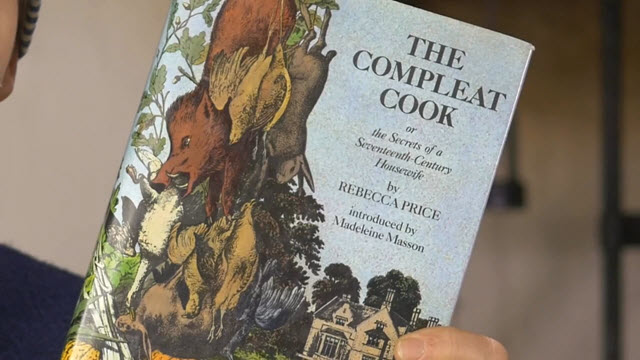 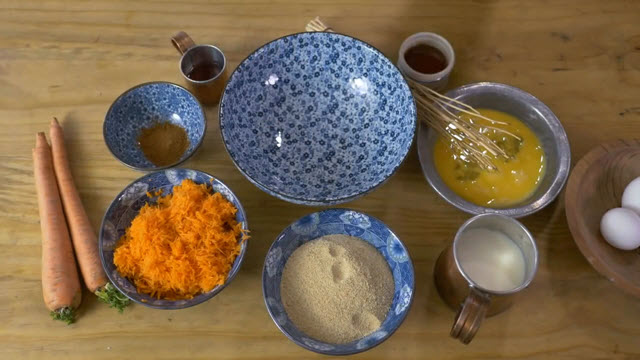 Add in melted butter and enough milk to make the consistency of batter. Pour into well buttered dish and bake at 350 degrees for 35-40 minutes.

In the episode today, we’re going to be baking a 17th century carrot pudding. Thanks for joining us today on 18th Century Cooking with James Townsend and Son.

Carrots are perfect for this time of year in the early spring. These root vegetables have been held over from last fall, so that’s what we’re going to cook with today.

Today’s recipe comes from The Compleat Cook by Rebecca Price. This book is available online. You can usually find it used. I don’t think it’s currently in print. Rebecca Price’s book is a manuscript collection of recipes from the late 17th century, somewhere around 1680. We can tell it’s a collection, because she calls this recipe a carrot pudding baked, my Lady How’s Recipe. I went digging through the old cookbooks and I found very similar recipes throughout the 18th century. There’s even one here in Primitive Cookery which is one of the cookbooks that we offer.

So this is a very simple recipe to put together. We start off with bread crumbs and what she calls for is the crumb of a two penny loaf. Now that’s very ambiguous. Loaves changed in size throughout this time period and it really depended on the sizes at the time as to how much a bread loaf weighed and in fact, the two penny loaf could be a two penny wheaten loaf or a two penny household loaf. I’m guessing from the idea that it’s Lady How’s recipe that we’re using a fairly high class bread, so it’s going to be the wheaten loaf and a two penny loaf, in the time frame, may have weighed, say, a little over a pound. I’m going to be adjusting this recipe and so we’re going to use just 6 ounces of breadcrumbs.

Let’s start off with the wet ingredients first. I’ve got 4 egg yolks, two egg whites. I’ve got my milk. This is 1 cup of milk, at least to start off with. The recipe calls for sweetening to taste. Here, we’re going to use honey, say, a tablespoon or two. A couple of ounces of sack. Sack, in the time period, is a wine used many times in cooking and it’s a kind of Sherry.

I’m going to put in just a pinch of nutmeg here. Now let’s add in our carrots, 8 ounces of shredded carrots, and finally, let’s add 6 ounces of bread crumbs, and the last thing we’re going to use here is 2 ounces of melted butter.

If your batter seems too dry, just add a little more milk until you get to a consistency that seems right. Now that our batter is mixed up, put it in a pre-buttered dish here. Some of the later recipes actually call for using a puff paste crust in this. There’s no reference to a crust in this particular recipe and I found that it works just fine by baking it straight in this dish.

Rebecca Price’s recipe suggests baking this for a half hour. Mine took a little bit longer, 35-40 minutes. I would bake it at approximately 350 degrees.

Let’s give this a try. Mmm, mmm, very, very nice. It’s really, it’s not too sweet, but it’s still plenty sweet. It’s almost like a bread pudding. In fact, in the later recipes, the 18th century ones, many times double the amount of bread crumbs in this, so it would be very much more like, say, a bread pudding with a little bit of carrot added. The sack and the butter have got some wonderful flavor in here. I think it’s one of the missing sauces that’s not popular today. Having a sack and butter sauce, very, very good, especially on this. The carrots are really good, but they don’t stand out so much that if you’ve got a picky eater, they won’t mind the carrots in this.

I was thinking about this recipe in a North American context and variations on it. In New England, white bread crumbs aren’t necessarily readily available in the 18th century, so what are you going to use instead? Cornmeal, I’ll bet, would be a great alteration. So if you put cornmeal in instead of the bread crumbs, and maybe instead of the honey, maple syrup, you’d have a great New England variation on this recipe.