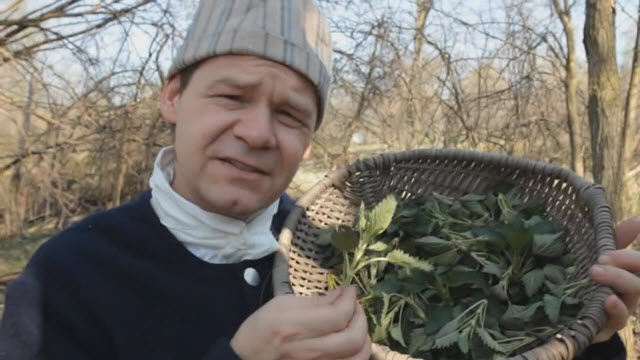 Gather together a good bunch of early springtime nettles. The best ones are right after they come out of the ground. You want to get the first half of the plant or the first 3 or 4 inches. You don’t want any of the hard stalks or roots. You might want to wear gloves when you pick these because they sting a little. Wash these off like you would lettuce for a salad and then chop them up finely.
Start the water boiling in a kettle and heat the butter in a skillet.
Add your chopped onions to your skillet when the butter has stopped making noise.

Once the onions are nice and brown, put the nettles in the skillet and stir for about 5-10 minutes.

Next, shake on the flour and add salt and pepper mixing well. 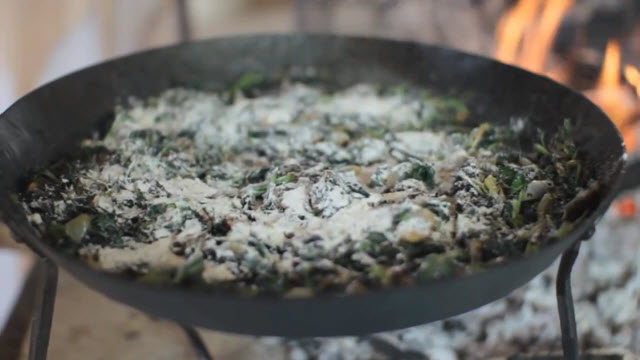 Pour all of the contents of the pan into the boiling water.
Add your chopped up stale bread to the soup and simmer for another 10 minutes.

Add your mushroom ketchup just before serving as an optional finishing touch and enjoy.

John Heckewelder was a missionary in remote Pennsylvania in 1756 and in his journal he writes this, “We live mostly upon nettles which grew abundantly in the bottoms and of which we frequently made two meals a day.” That’s amazing. You know, I think we’ve got enough nettles, let’s head to the kitchen.

I’ve got a good bunch of nettles gathered here. These are early springtime nettles, the best ones, right after they come out of the ground. You want to get the first half of the plant or first 3 or 4 inches. You don’t want any of the hard stalk or any of the roots. You might want to wear gloves when you pick these because they sting a little bit but in the early spring it’s usually not too bad. Wash these off like you would lettuce for a salad. Now let’s work on the base of our soup.

We need to get some water boiling here in our kettle. I’ve got about a quart and a half or so here.

And while that’s heating up, we’re going to sauté some onions in a little bit of butter.

This is about 4 ounces of butter. Hannah Glasse’s recipe for meager soup calls for the butter to be cooked until it’s done making noise and then you add the onions. We’re going to use about 3 medium onions.

While our onions are browning, let’s chop up our nettles nice and fine.

We can take our chopped nettles now and put it right into our browning onions.

Well, we stirred these for about five or ten minutes and now it’s time to shake on about a quarter of a cup of flour into this.

And a little bit of salt and pepper. So now it’s time to add the contents of our pan to our boiling water.

Many 18th century soup recipes call for a chopped up stale bread crust to be added to the soup.

We’re going to let this simmer for another ten minutes and then as an optional finishing touch, we’re going to add a little bit of this mushroom ketchup that we’ve made in an earlier episode.

This soup is excellent. If you’ve never had nettles before, nettles soup or any other kind of nettles, it’s the perfect time of year, right now, to go out and pick them. All the things you’ve seen here today, all the cooking equipment, all the clothing, all these things are available in our print catalog or on our website and don’t forget to follow us on Facebook.