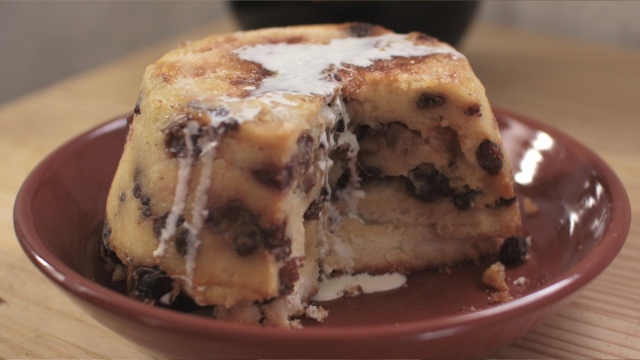 Serves one to six, depending on how polite you are.

“A white-pot custard for my white-pot queen,” cried Kemp, waving his bauble. “Mark this boy,…A white-pot mermaid custard, with a crust, lashings of cream, eggs, apple-pulse and spice, a little sugar, and manchet bread. Away! Be Swift!” (Tales of the Mermaid Tavern, by Alfred Noyes)

The topic and contents of this post are taken from a video we produced a couple of months ago. Based on the amount of feedback we received, this recipe is apparently a viewer favorite. It’s definitely a favorite of ours!

The name “White Pot” originates from the Devon region of England. But this sweet, buttery custard bread pudding, layered with sweetmeats (dried fruits) and topped with a caramelized sugar crust, was known to colonial cooks as well, if not by name, by construction. As far as we are concerned, this dessert deserves a culinary resurgence.

Notes:
You will need a sloped-sided baking pan for this recipe that holds about a quart, such as a Charlotte mould (said to be named after King George III’s wife), a trade kettle, or any other sloped-sided ceramic or metal vessel. We used a Tin Bowl in our video. A medium rectangular bread pan will work as well.

If you are using a wood-fired oven or Dutch oven, be sure to also use a trivet onto which you can place your baking pan. This will prevent the bottom of your White Pot from burning. If you don’t have a baking trivet, a tripod of pebbles will do in the meantime.

Assembling:
Liberally butter the inside of your cooking vessel and set aside. Do not skip this step or you’ll be disappointed. Mix the heavy cream, spices, and salt. Set over medium/ low heat and bring  to a simmer, occasionally stirring to prevent a skin from forming. Remove from heat to cool slightly.

Beat together the eggs, egg yolk, and sugar. When the cream mixture has cooled slightly, remove the cinnamon stick, and pour 2 to 3 tablespoons of the cream into your egg mixture, whisking as you pour until the cream is well incorporated. This will temper your eggs so they will not curdle. Continue to add approximately 1⁄4 cup of cream at a time to your egg mixture, whisking well as you pour, until all the cream is incorporated into the eggs. This is  our custard liquid. Set it aside.

Slice your bread into approximately 1⁄2” slices, then trim away the crusts leaving only the  slices of crumb. Butter your bread slices fairly liberally. This works best if your butter is softened.

Place a layer of bread, buttered-side down, into the bottom of your buttered baking pan. Push your bread down just a bit, but take care not to compress it. Fill in any gaps with smaller pieces of bread. Sprinkle a layer of raisins and dates on top of your first bread layer. It does not have to be a solid layer of fruit, as the raisins will expand while baking. Repeat the bread layer once more, placing the buttered-side down. Top with another raisin/date layer. 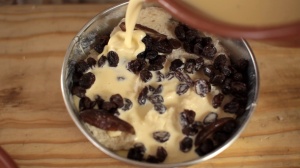 Top off your pan with a layer of bread, buttered-side up. The custard liquid will soak up into this layer. Sprinkle about a tablespoon of sugar on top. Your White Pot is assembled and ready to bake.

Baking:
Baking times will vary, depending on the size of your pan and the actual temperature of your oven. Check your White Pot after 30 minutes. The top will be well browned when it’s done. Your White Pot may jiggle a bit when jostled, but there should not be liquid pooled in the middle. If the top is not browned, continue to bake it, checking every 10 minutes or so to make sure it doesn’t burn.

Serving:
Once your White Pot is finished baking, remove it from the oven and allow it to cool for 10 minutes. Carefully run a knife around the inside edge of the baking dish. If you are using a tin-lined pan, be especially careful with your knife so you don’t damage your tin lining. Invert the pan onto a plate and rap on the pan and jiggle it to get the White Pot to separate from the bottom of the pan. This is why it is important to butter your pan liberally. 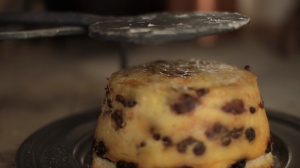 An extra special finishing touch for your White Pot is to sprinkle it with sugar and brown the sugar as you would on a creme brulee. To do this in a period manner, you can use a Salamander or an ash shovel. Heat the plate of the salamander until it is cherry red, and prop the plate over the sugared top until it bubbles and browns. (Be very careful doing this. Handling a hot salamander requires a good pair of thermal gloves). You may also brown the sugared top using a modern kitchen torch or a conventional oven broiler. If you use a broiler, watch your White Pot closely to avoid over browning.

Slice into wedges. White Pot may be eaten warm or cold. It is delicious topped with a little cream or sack (sweet sherry).

13 Responses to A White Pot Recipe